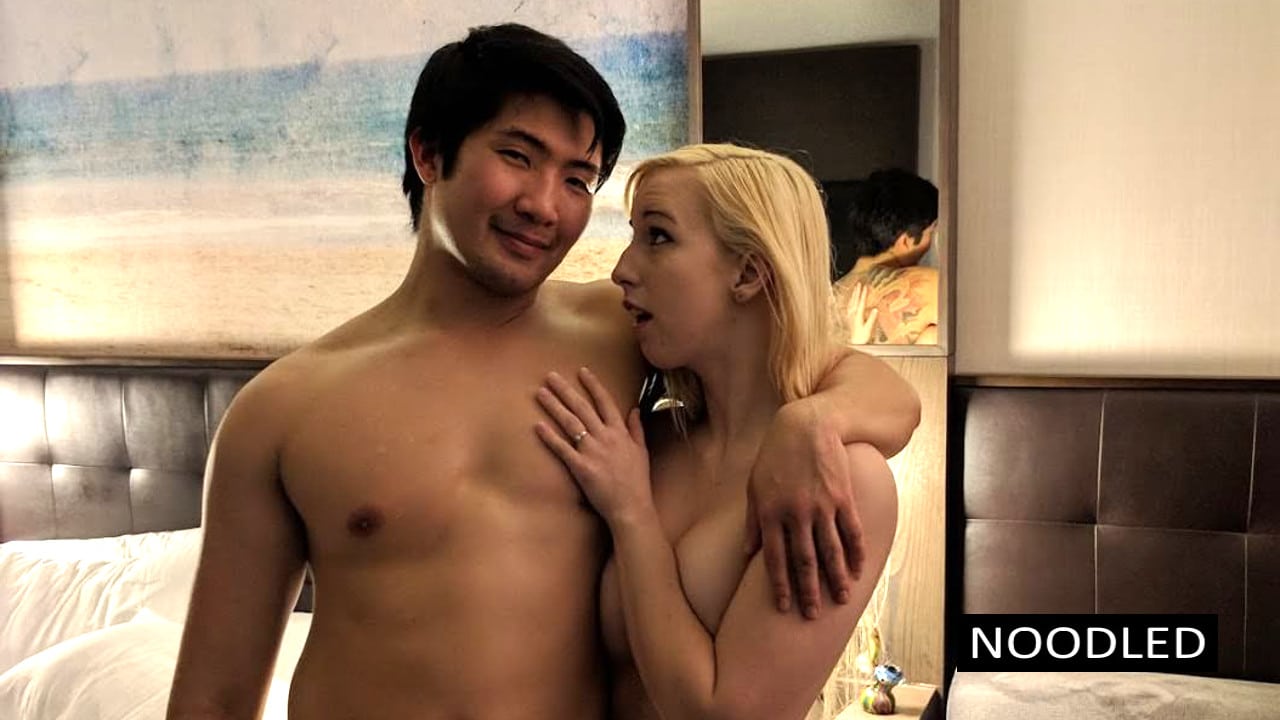 [UPDATE: Interesting new twist to this story, which appears to have backfired on the subreddit. Updates posted in bold text down below.]

A project update posted by one of the organizers gave members a breakdown of financials of the shoot -- it cost them $2930 of the $3197 raised -- as well as breaking news. Writes the0clean0slate about the completed scene: "Sneak peak of the plot: 'STPeach' aka STPear got pissed at the racist white trolls harassing her for dating an Asian man, and she decides to fuck her boyfriend while streaming. Slobbering his big Asian cock while flipping the racist part of her audience off."

STPeach is a a white female Twitch streamer worshiped on /r/aznidentity for having an asian boyfriend.

"I hope this generates maximum outrage for the 4-chan or sexpat types," he continued. And that it did.

"Since [white male] snowflakes seem to assume [asian females] are theirs now, we need a scene where [an asian female] outright denies [a white male] and proceeds to make asian babies," suggests Endobebop, who also want to see smut of an asian senator cucking Trump in front of Ivanka.

GusXie would like to spank his monkey to "a good and pious Christian Asian-American basketballer" getting seduced by a cheerleader, and possibly also some ice skating or K-pop flavored bawdiness.

It is difficult to see how the unorganized basement dwellers of 4-chan can top such a mic drop last laugh in the sexual insecurity-fueled war of internet communities that has raged for years. The war may even be over. Requests for 4-chan comments on any plans of their own were met with bitter and defeated laconism -- Why do you think we care?

"Win win all around."

The shoot happened on the date that we promised, but due to some legal paperworks issue, we could't release any of the pictures earlier. However, all legal issues had been squared away and we got all of the forms we need.

Final report for the crowdfunding
We are super proud of the fact that the community came together within a week and got the full amount that we asked for in the beginning, $3000. r/aznidentity mod team and Asianschlong team express our deepest gratitude to all donors.

Keep in mind that all of us were volunteers and didn't take a single cent of this money. The only salaried person on set that day were the male and female talents.

Behind the scene
We got a total of 5 aznidentity-level-woke members helping us on set and getting training. This is massive progress. Jeremy taught us all how to do it. So instead of 1 or 2 AM knowing how to actually create adult media to serve the Asian community, we now got 5 people who knows how to do it and went through the pipeline.

There was also a new male talent coming in, so we don't have to rely on Jeremy being the only active AM performer. That guy is also incredibly woke and he has a cool history too (of course also a big dick). Maybe we can do an IAMA with him too.

Pictures of the shoot
Pictures are selected to protect the identity of the participants who don't want to be revealed. However, if you see pictures that you want me to remove, PM me and I will delete it ASAP.

Sneak peak of the plot
Our "STPeach" aka STPear got pissed at the racist white trolls harassing her for dating an Asian man, and she decides to fuck her boyfriend while streaming. Slobbering his big Asian cock while flipping the racist part of her audience off.

I hope this generates maximum outrage for the 4-chan or sexpat types. That would be great publicity. lol.

Win win all around. I personally love this activism format.

You guys could nominate what plot we should do next and you can create a crowdfunding right here. Also, if you want to fund/organize some shoot like this, let us know and we can get you partnered with the Asianschlong production team.