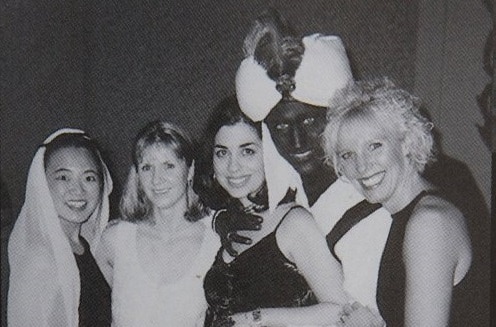 These wannabe secret service gentlemen disguised as civilians thought it proper feminist “wae” to gaslight and then intimidate a Canadian tax payer for having the audacity to inquire about where her money has gone.

Few outlets thought this was a controversy worth mentioning, and of those that did, many angled the story as Trudeau “firing back at racist HECKLER.” A prime minister being asked questions by concerned citizens is of course the real victim. 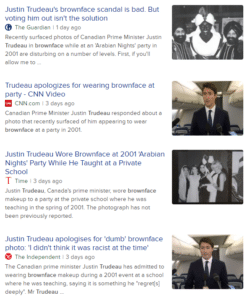 Lately, no doubt you’ve heard, the offense archaeologists and outrage necromancers have unearthed not one, but three incidences of Trudeau in blackface — ten years ago.

While the media reported on it, they made sure to invent a new term — brownface — to circumvent the conditioned Pavlovian response associated with “blackface.”

And the apologia started right away. Global News reminds us it is in the past, this stupid, silly thing that Trudeau did — and he should stop apologizing.

National Post implores us to cancel cancel culture. It is a bad thing, remember? And besides, Trudeau’s ego is already wounded! Are you some kind of cruel monster?

Trudeau is good looking, says all the right woke things, and he is good looking. So the rules should not apply to him. He is not a player in this farce of a culture we live in, he just makes the rules.

I mean the apologia is going super sayian at this point with journalists actually saying blackface is a Canadian past time (in an article titled “Why Trudeau’s ‘brownface’ photo is not shocking” of course).

I think these journalists should be the first to do it and lead the charge into allowing Canadians to blackface themselves on Halloween. Start hashtag #BlackfaceForTrudeau now!

Until then, I say fuck those people.

You want to fight against cancel culture? Great. I will help you protest, sign petitions, do whatever is needed to make this ridiculous crap stop. But until it has, the rules are the rules and no one should be above them.

So: no, Trudeau does not get off the hook in my book. He gets to come down in the shit with the rest of us and reap the culture he and his PC crowd have sown.

Remind Trudeau and his followers that they’re all racist neo-nazi blackfacers led by a blackface KKK Grand Wizard on the prowl for innocent black body LGBTQIAX2spirit+ babies to BBQ with a flamethrower for afternoon snacks. And then remind them again.

The origins of common (and not-so-common) superstitions

Meet the Yugo: the worst car ever made

It’s the worst timeline yet, accordingly; you may as well have added the slashes as well.