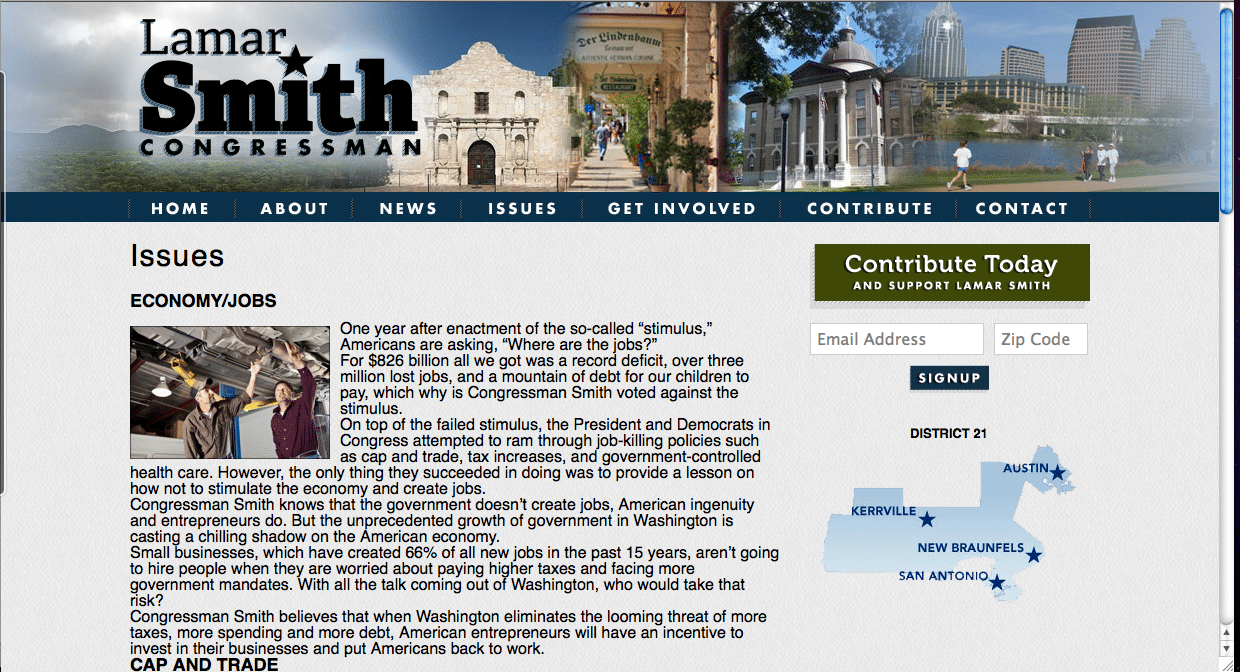 Lamar Smith, author of the Stop Online Piracy Act (SOPA), has gotten caught up in his own case of copyright infringement.

Jamie Lee Curtis Taete of Vice investigated an archived version of Smith’s official site, texansforlamarsmith.com, using Wayback Machine, a time capsule that captures different variations of website as far back as 1996. This led to the discovery of an original background image that did not credit its owner, photographer DJ Schulte.

Schulte has stated that the image is a Creative Commons photo usable by anyone so long as they give proper credit. ”My conclusion would be that Lamar Smith’s organization did improperly use my image,” said Schulte. He also gave his stance on SOPA via his Flickr account:

“Unfortunately, our U.S. Congress is trying to take more control of the internet for large media corporations via the SOPA bill than actually protecting the rights of creatives and the work they produce. I have had images used improperly (stolen) by everyone from some guy in Pakistan to the Republican Women’s Club of Missouri to a Chinese firm selling my images in bulk so protection of rights is needed but the SOPA bill is not the answer. This bill is a control grab of the internet for the big entertainment corporations and will hurt an innovative and open internet where new ideas and art are shared and nurtured.”

The irony of this situation is that, if the controversial SOPA bill is passed, Lamar’s site could potentially have action taken against it and Schulte would be free to pursue a lawsuit involving the very author of the bill. SOPA grants the government power to censor and shut down any web site in violation of its strict online piracy rules. This includes countless sites like Tumblr, Flickr, and even Google, which is planning a 12-hour blackout to protest the bill on January 18.

[Update: Smith’s site is a domestic one. So the shut-down rule, which applies to foreign web sites, isn’t applicable. And if there were a violation under Creative Commons, Smith would either have to remove the image or credit Schulte. ]

Shortly after the post ran on Vice outing the infringement, Lamar’s site went down for “maintenance.” Vice ran a follow-up post surmising that the site’s robot.txt files had been replaced to prevent further internet archive investigation, and Curtis Taete shed light on a number of discrepancies between the site once it went live again vs screenshots of the old pre-maintenance version.

You can join the “Copyright Hypocrite Hunt” here and help seek out further copyright violations on the 31 other SOPA co-sponsors’ websites.

Websites are going black in protest against SOPA – LULZ