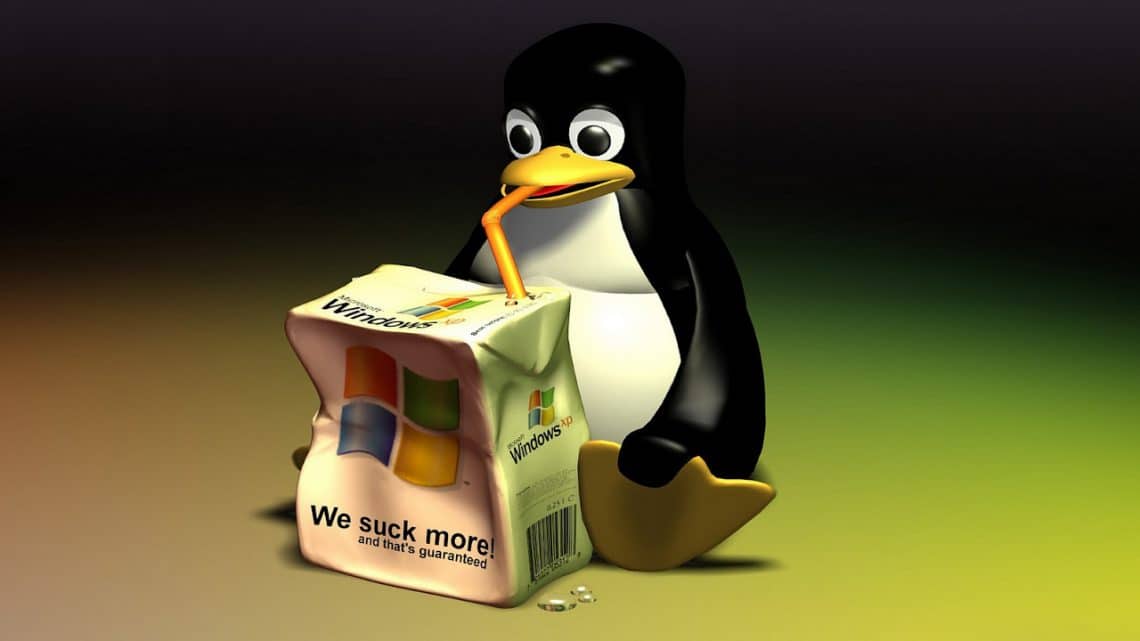 It made me think. Once the pain subsided, I realized that every female performer I’ve ever met has been essentially Windows, Mac or Linux too.

(Saying that probably makes me a sexist but being a sexist isn’t as bad as being a racist, and I know I’m one of those because I think all Chinese people can do Kung-Fu.)

She knows she’s not particularly beautiful and so she lives at the gym. From the neck up she’s Los Angeles, from the neck down she’s San Diego.

About once every five years she’ll decide that working out’s not enough, make a major upgrade and appear with a new pair of tits. You haven’t the heart to tell her that her tits were never the problem in the first place.

At first Ms. Windows seems amazingly easy going. Over time it becomes clear that she’s bi-polar. She can be completely cool and happy, but then spontaneously melt down and fall into mute silence. Leave her alone for a minute and she’ll perk up as if nothing’s happened.

Ms. Windows will try anything, but she can’t honestly call every experiment a success. She’s compatible with just about anything you can think up. It’s hard to name a fetish she hasn’t tried or isn’t willing to.

She’s the best looking woman you’ve ever seen. Even the things that aren’t perfect about her just make the perfect things look better by comparison.

On closer inspection she’s not fit as Ms. Windows but she makes up for it by being perfectly formed. It’s all about bone structure.

Ms. Mac is a little self obsessed. When she’s not talking about herself, she’s telling you why you’re better off with her than Ms. Windows. She does little tricks. They’re cute but mostly pointless. You find it hard to believe anyone this hot can be so insecure.

She gets breathless walking up stairs and you know she could use a little time in the gym, but if you’re dumb enough to point that out she’ll bore you to tears with suspect charts which prove you’re wrong.

She’s so stable that when she does flip out you blame yourself for it. She’s perfect so it can’t be her fault right?

You might have had wilder sex but you’ve never had it better. Ms. Mac only does a couple of things, but she does them so well your eyes roll-back in your head and you forget your own name.

Very occasionally she’ll break out a new move, nine-times out of ten it’ll be the best you’ve ever had the first time she does it. If you ask her for something she doesn’t do she’ll just tell you why you don’t need it.

The first few times you see her it’s hard to decide if she’s hot or not. She treats her body, as she treats her environment, as something to be played with. Tattoos, piercings and insane hair make what she looked like before she started tampering an irrelevance.

Though she’s not glamorous, the more you see of her the better she looks, but if you mention her appearance she’ll accuse you of being superficial.

Like Ms. Mac, Ms. Linux can be a little insecure. She spends a lot of time telling you how Ms. Windows and Ms. Mac approach life in completely the wrong way. You’d pay more attention if she didn’t spend most of her time copying what they did and trying to fit in.

Her creativity evidences itself as an obsession with experimentation. She consumes drugs the way some people consume alcohol, combining them as if she was trying to mix a punch recipe in her head. Due to this she melts down a lot. When you suggest she’d be more stable if she experimented less, she accuses you of missing the point.

Ms. Linux does even less than Ms. Mac. Everything’s pretty basic but when she get’s it right she’s world class. Like Ms. Windows she’s prepared to try anything and her tendency to become obsessed with things means that, over time, she normally gets really good.

If you ask her to dress-up she’ll laugh at you until your erection subsides. You put up with it because she’s the coolest chick you know.

6 ways social media is turning us into monsters

AmigaDOS is that crazy woman you picked up at the goth nightclub. you were drunk, you thought she was on acid, and your first night of sex was insanely great. you quickly learned: she wasn’t on acid – she’s like that all the time. she has one or two friends who are even stranger than her. despite the insanity, she’s great at doing several things at once, she puts on a fantastic show when you both go out, and the sex continues to be insanely great. she is completely untouched by the hundreds of STDs that Ms Windows seems prey to. unfortunately you and she drifted apart, although you occasionally hear rumors from equally smitten friends about how she’s going to be back soon. when you’re trying to get Ms Windows to do something less than vanilla, you remember AmigaDOS with fondness.

Sheramil, don’t forget, Ms. Amiga has a past filled with horrible abuse. Makes you feel kinda guilty about exploiting her beauty…

I’d like to stick my floppy in Ms. Mac but she doesn’t fix the toilet and do dishes like Ms. Windows does.

Looks
The thing you have to understand about Ms. DOS is that she’s simply from another era. Hers was a time when sexiness was all about what was promised and implied; actual revelation was the height of vulgarity (probably because her underwear is designed to the same code as an earthquake-proof building in San Francisco, but damn does it give her curves). Her hair, makeup, and dress really only come in one style, but it is often looked back upon with fond nostalga. It’s iconic in its own way.

Personality
Ms. DOS is all about the art of the burlesque and the tease – the promise of revelations to come, and the excitement in waiting for something that, with just a little more effort and patience, will be REALLY GOOD – yet somehow never seems to quite materialize. She’ll promise you a good time, but you have to put up with a lot – a lot of preperation on her part, a lot of etiquette on your part, formal drinks before leaving, hands proffered, doors held open, and just the right combination of timing and luck are all required to pull off a successful rendevous. Still, there’s no denying that she has a certain allure that the younger generation lacks – there’s an air of mystery and intrigue about her that the modern competition simply lacks.

Sex
Let’s be charitable and say that Ms. DOS was brought up in a less permissive era. Experimentation was frowned upon, external tools were discouraged, and there was, for every conceivable situation, a perceived Right Way To Do It that everyone was simply supposed to accept as gospel. Perhaps this is why she is so skilled at the art of the tease; knowing that consumation will be lacking, the foreplay is all that’s left to make the experience memorable. Still, there’s a certain comfort in her tried-and-true routines; it may not be as flashy or exicting as what the kids are doing today, but you know exactly what you’re gonna get, and in the end that can count for a lot.

She’s heard of The Joy of Sex but she only reads hard-sectored disks.

I hope you don’t mind:

Ms. UNIX
Looks: Think She Hulk, definately not for the timid. She has a lot of styles of clothing, but they all look like they came from the same blind tailor, and prefers just wearing the one set of clothing.

Personality: She hates almost everybody. Getting in with her is an expensive proposition. She doesn’t like doing a whole bunch of things, but will do them with excelence, usually only with expensive friends. She’s definately from an earlier time.

Sex: She’ll do things that none of the others can even attempt. She’ll go forever. Then when you try to do anything remotely like you would with the others…. She’ll dump you.