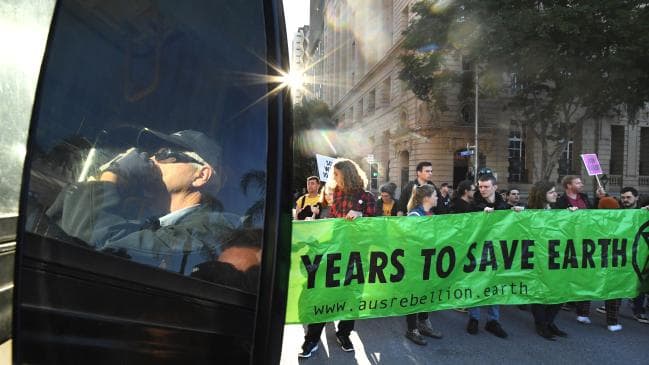 If you're on social media or perhaps just an ordinary person trying to go to work in or near a major western city, you already know Greta Thunberg's obnoxiousness doesn't end at her over the top theater performances. She has her very own children of the corn cult -- Extinction Rebellion -- and they just keep going viral for all the wrong reasons.

The group is inspired by the belief that the world is ending in as few as 11 years, and so to save it, it must stand around in the middle of the road and block traffic until global LGBTQIAP communism rises from the sheer nuisance. As little as 8% of the public supports their message and methods of protest, according to a survey in the Telegraph, and 54% of those who took the survey call the whole thing a “waste of time.”

So after months of this shit, it turns out people have finally had enough. Throughout Britain and North America, the public has been shutting the clowns down -- and the resulting clips are hysterical.

Let's start with an example from Britain. A female Extinction Rebellion member who glued her hands to a train was confronted by a group of working class Brits of varying ethnicity who asked her how she got to the venue, and why she would be so stupid as to protest the electric rail — arguably the cleanest form of mass transit.

In a separate protest held in Canning Station, two XRers were pulled from the top of a train they climbed onto, and dragged away kicking and screaming.

Angry commuters then turned their anger against camera operators from Extinction Rebellion filming the protest.

Extinction Rebellion protesters who held up a crosswalk in San Francisco during rush hour were also subject to the public’s anger. A pedestrian snatched the banner they used to block the roads and threw it away, to the cheers of onlookers and drivers.

According to the protesters on Facebook, the footage of the confrontation was shown to San Francisco Police Department, which allegedly informed them that they were free to lodge a report, but the police would not waste its time investigating it.

Extinction Rebellion members in Long Beach, California who invaded an In-and-Out Burger were literally carried out by workers like petulant children after they started screaming in customers’ faces with megaphones. Police arrested one XRer.

And finally, the attempted McDonald's block in Frederiksberg, Denmark. Extinction Rebellion members were later seen lining up for (a different) McDonald's for a meal of their own.

Maybe they should stick to arresting broccoli.

Despite being uncritically lauded as climate do-gooders in mainstream media, Extinction Rebellion is in fact an anarcho-primitivist effort to destroy capitalism and Western civilization. One of the far-left group’s own co-founders, Stuart Basden, freely admits as much:

XR isn’t about the climate. You see, the climate’s breakdown is a symptom of a toxic system of that has infected the ways we relate to each other as humans and to all life. This was exacerbated when European ‘civilisation’ was spread around the globe through cruelty and violence (especially) over the last 600 years of colonialism, although the roots of the infections go much further back.

As Europeans spread their toxicity around the world, they brought torture, genocide, carnage and suffering to the ends of the earth.

Basden's racist screed goes on and on like this.

Did we leave out any good clips? Let us know in the comments.