There are endless examples of online influencers deceiving their fans, and even those who aren’t even capable of taking basic care of themselves.

The most recent example of both is Lisa Li, a Chinese beauty and glamour e-celeb who blogs about her pretty upscale life to an audience of over one million Weibo followers.

Li is the quintessential “social media influencer.” She flaunts exotic vacations and designer clothes, and her meals are carefully stage managed — and expensive.

The reality, as shocked fans just found out, is something entirely different.

Lisa Li lives in a shitpile of trash, mold, and feces.

She was exposed by her landlord, Ms. Chen, who was furious with the streamer for damaging the apartment and refusing to pay multiple utility bills amounting to thousands of yuan. Li ignored a number of phone calls before Chen decided to give a guided tour of the apartment to Pear Video, a Chinese media outlet.


[update: watch?v=2D7zmtfnumE has been deleted; replaced with what appears to be a mirror]

Chen told Pear Video she tried to hire professional cleaners, but they didn’t want to go anywhere near Li’s apartment, according to BBC.

Chen said she had no choice but to contact the police about her damaged property and the unpaid bills.

“More than 60,000 users have commented on her page, many saying they were unfollowing her and calling her ‘fake,'” reports the BBC.

It’s easy to sympathize with Ms. Chen for her damaged property, but she should do a bit of research on prospective tenants. It’s no secret that livestreamers tend to be filthy and mentally ill degenerates.

Consider popular Twitch streamer Eloise, who usually streams Hearthstone in front of a computer. Sometimes she shows off more of her apartment, and it’s sickening.

Nadeshot explains why he’s not “even mad” at his #Fortnite team for trashing house 🗣️https://t.co/WJXD7FXpPC

Even one of Twitch’s most popular (and undoubtedly one of the most wealthy) streamers, Asmongold, lives in a sea of trash.

Maybe someone needs to break Jordan Peterson out of rehab to tell these disgusting slobs to clean their rooms.

Trust no one—not even yourself

10 absurd inventions that prove you should never drink while inventing

[…] Related: Landlord exposes glamour influencer — who lives in piles of trash and shit […] 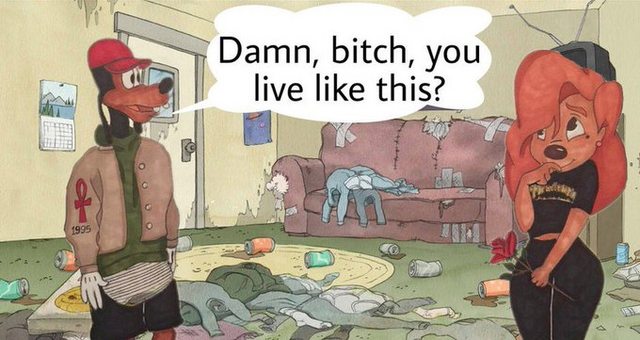 […] Related: Landlord exposes glamour influencer — who lives in piles of trash and shit […]