For those not in the loop, Gamergate is an online movement fighting for better ethics in gaming journalism and against gaming censorship that is dogged by criticism that its worst members harass women game developers.

For many big media companies tracking the Rapp case, Gamergate became the obvious whipping boy. An article by the Washington Post criticized the Rapp allegations as highly skilled oppo tactics and implied they were the work of 8chan, the anonymous message-board website, and Kotaku in Action, the official Gamergate subreddit. The Mirror UK accused Gamergaters of “slutshaming.”

But the group that did a ridiculous amount of investigative legwork into Rapp’s alleged illicit activities was not part of Gamergate at all, but from a little known forum site called Kiwi Farms.

Launched in 2013, the site is devoted to making fun of people the users refer to as “Lolcows.” Lolcows are any person, usually not a public figure, who draws negative attention to themselves on the Internet in an amusing way, hence Alison Rapp. Users of Kiwi Farms have no agenda other than to dig up more information on active social media users and laugh about it. In fact, they find prominent Gamergaters as amusing as their radical feminist enemies.

Some of the users on Kiwi Farms would make great investigative journalists or opposition researchers if they spent their time productively. Whichever user made the allegation against Rapp presumably had to trawl the pages of call girls in the Seattle area, find images with known images of Rapp, and check the meta data from each individual picture to find any matches. None of this could be automated, but perhaps Rapp herself provided the initial clue after her firing.

The real problem with Kiwi Farms is that unlike Gamergate, they have no stated mission. They exist only to watch the world burn. 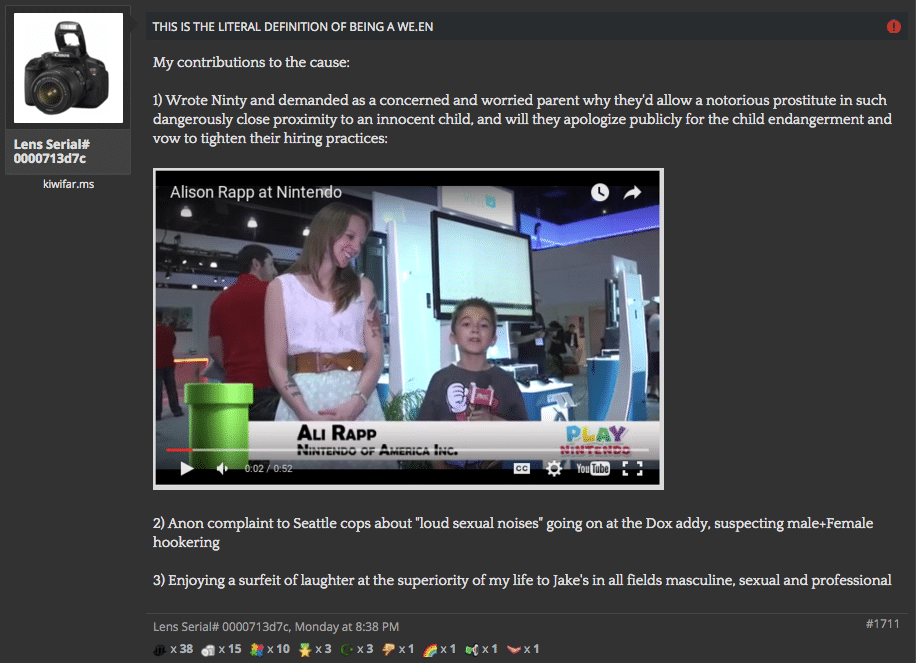 If Gamergaters and anti-Gamergaters want to cool down their never-ending flame war, they probably need to acknowledge the shadowy third party egging them on. And the media, of course, should do its homework before tossing another false allegation onto Gamergate’s already full plate.

P.S. Protect your privacy with NordVPN. Here are 5 reasons to use a VPN at all times if you have any kind of sensitive data or you run a business: