Dem operative calls for biological warfare against Americans to win 2020 Jena Friedman wants repeat of 1984 Rajneeshee bioterror attack: "save democracy" by infecting republicans with salmonella a few days ahead of 2020 election. It appears the Democratic primary shitshow has certain quarters worried.

“I just looked through my verifieds seeing if Tapper came back and saw that @benandjerrys follows me,” Jena tweeted in reference to the far left ice cream company partnered with hate leaders. She then called on the company to “save democracy” by making “a MAGA themed pint with salmonella and release it a few days before the election.”

The strategy was praised by leftist twitter activists who chimed in with jokes about mayonnaise and other fare associated with racial stereotypes about whites, but the tweet (archived) disappeared when she noticed it gaining traction among republicans.

A flurry of tweets claiming victimhood and calling her detractors nazis instead took its place.

Jena Friedman’s plan to win elections through salmonella infections isn’t her original creation. In fact, it’s a direct rip-off of the 1984 Rajneeshee bioterror attack in which a hippie cult attempted to decrease voter turnout in The Dalles, Oregon by infecting 10 local restaurants with the very same bacteria. The bioterror attack resulted in 751 known infections and 45 hospitalizations.

Ma Anand Sheela, a Rajneeshee leader and the main person in charge of their biological warfare lab, justified their actions by calling the non-cultists bigots: “I tell you, the county is so fucking bigoted, it deserves to be taken over.” (26:13 in the video below)

Update, August 2: Jena Friedman now claims the bioterror plan was a joke — and then contradicts herself one sentence later by suggesting that she’s for carrying it out any way.

Update, March 1, 2020: The emergence of the coronavirus has inspired checkmarked left-wing activists to once again urge biological terror attacks. Ali A. Rizvi took to twitter to suggest his followers try to infect Americans en masse at Trump rallies — archive.

If voterfraud and corporate fake media don’t suffice made apparently by the 2016 elections they now want to take it a step further and bring in big tech even more to hit the censorship lever to max and now openly talk about enacting domestic bio-terrorism against their own citizens.

Now take a wild guess what discussions are talking place behind closed doors if they’re so bold, arrogant and disconnected that they’re on the up and up to talk about it openly on social media, only to backtrack when it gains traction – A post fabricated excuse where they contradict themselves in the same post only goes for show how dishonest and mindbogglingly lowly they must think of their citizens & their conceived level of stupidity.
One can see through this farce from so far that one could predict this meandering of theirs years ahead of time.

Jenna Friedman should be labeled a domestic terrorist by the SPLC and ADL for using threats of terror and violence for political gain. This is textbook definition of domestic terrorism. I understand venting emotionally charged ideas is way safer than bottling them up, because they can manifest into physical action. This is why anti-hate speech laws should remain unconstitutional.
Go out there and use every racial, religious, ethnic, or any other slur category till your heart’s content knowing you are keeping the pot from boiling over. (((#BDS)))

All these poor babies can not stand being out of the “power” circles. When a kid has a temper tantrum. A good parent ignores them. We need to be adults and ignore the children

Stuart Moon (@Stuart_Moon20) from Los Angeles, CA: Jena Friedman’s suggestion of a biological terror attack against republicans ahead of the 2020 election is “brilliant.” 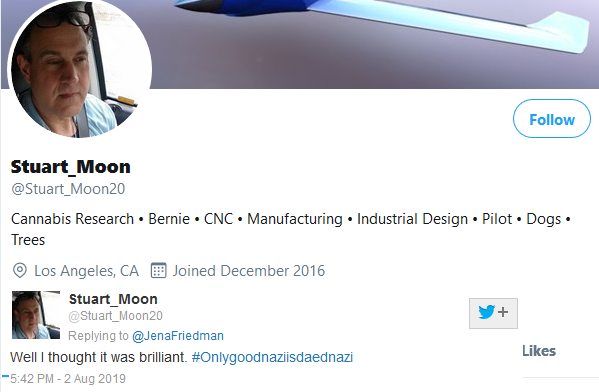 OH FUGG HES A DOGPILLER TOO JUST LOOK AT HIS INTERNETS IS SAYS HE LIKES DOGS!!!! AND BERNIE. THIS IS ALL THE EVDENCE WE NEED TO SHUT IT DWN!

Your website is named “Lulz”, yet you seem unable to grasp the humor of a former Daily Show writer… deep webner gets trolled and triggered by (((mainstream liberal feminist))). Sad!

Yes, my nuance filter isn’t exquisite enough to find “humor” in the suggestion to poison millions.

If you deny it you’re also against the philosopher kings of color who invented the groundbreaking CNN Baltimore Logic precedent, making you a double racist. 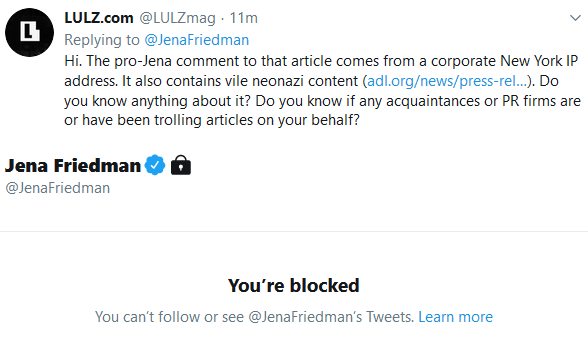 If you want to continue to see her tweets just sign in with a separate account not your lols one.

I’d be inclined to agree, but she is so obviously making this joke out of anger and hate. This is also a hate of a very large, diverse group of people, who are probably not all nazis, in fact probably very few, and some may even be good people, even from a leftists perspective. Even if it is very hard for salmonella to kill a person unless it is sick to begin with, it can cause problems for months and can even cause arthritis.

She’s also a Hillary Clinton fundraiser, which sorta negates her Daily Show prestige. It’s no wonder Hillary Clinton lost with allies like that. I wonder what other bright ideas they’ll have to convince the American people which side is right? gently caressing crazy.

WOW. This is sick.