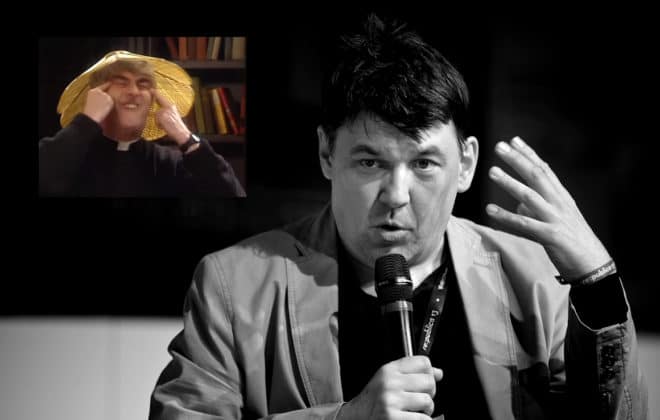 Graham Linehan is a hypocrite of the highest order.

The British comedy writer best known for his work on The IT Crowd, is standing against freedom of speech, attacking Scottish comedian Count Dankula for his “grossly offensive” joke.

Earlier this week, 30-year-old Markus Meechan, also known as Count Dankula, was given a guilty verdict of “being grossly offensive” after he posted a video in which he joked about training his girlfriend’s pet dog to make the Nazi salute in a video titled “M8 Yur Dug’s a Nazi.”

Meechan received support from The Office star Ricky Gervais and israeli comedian David Baddiel, who defended his right to free speech. “If you don’t believe in a person’s right to say things that you might find ‘grossly offensive’, then you don’t believe in freedom of speech,” said Gervais, prompting an outpouring of support for the young Scottish comedian.

Unlike other comedians, Linehan, a self-proclaimed feminist and Antifa supporter (“If you’re not Antifa, what the hell are you? Anyone with any morality at all is Antifa,” wrote Linehan last September) cheered on the guilty verdict and the possibility of a prison sentence for making a joke.

“A shitposting youtuber who is so bad at jokes he’s going to jail. How is that not funny?” But then, I love offensive comedy,” said Linehan. When others on Twitter pointed out that his own comedy, Father Ted, had featured a character performing a caricature of Hitler—along with the Nazi salute—he responded by calling them “the dumbest motherfuckers on the planet.”

The show, which made light of Christians and Catholics, also included jokes about Asians and other minorities that would be considered “racist” through a contemporary lens.

Offensive humor is only acceptable when you’re Graham Linehan, apparently.

Linehan, who was previously called out by the LGBT community for supporting TERFs (“Trans Exclusionary Radical Feminists”) and comedically portraying the assault of a transgender woman in his comedy, The IT Crowd, does not see the irony in championing laws that imprison comedians for being “grossly offensive.”

Referring to Meechan as a “cunt,” Linehan continued his tirade against the beleaguered comedian by calling the injustice “funny.” He took aim at other British comedians like Jonathan Pie and falsely labeling the Scotsman of being a member of the “alt-right.”

Linehan, the commissar of jokes, declared that Meechan had not made an “acceptable ‘joke’” and justified the court’s ruling.

When the real commissars come for Linehan, there won’t be anyone left to stand up for his right to free speech.