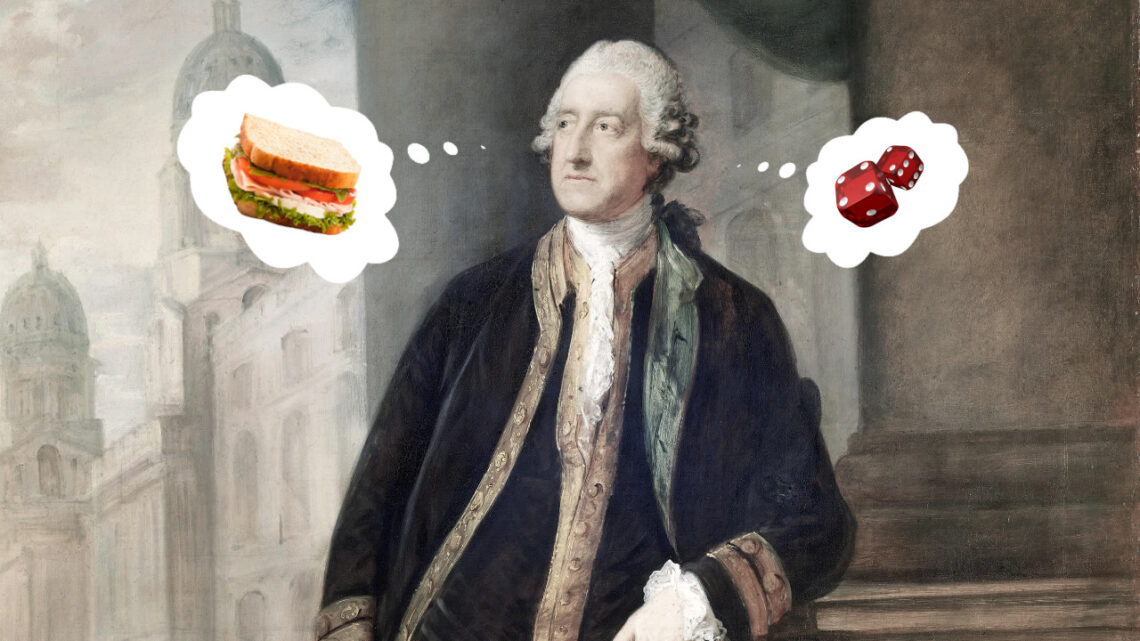 Everybody likes a good sandwich, right? Whether it’s a sky-high pile of pastrami between two pieces of fresh rye bread or the wonderful mashup of Vietnamese and French food in a banh mi, the sandwich remains a popular choice for hungry eaters around the world.

What most people don’t know is the fascinating history behind the creation of the sandwich. It’s a tale of a British statesman’s obsession with gambling and drinking and how it led to one of modernity’s favorite foods.

The British statesman who became a food influencer

John Montagu was born in 1718, the son of Edward Montagu, Viscount Hinchingbrooke. His father died when John was four, and he soon succeeded his grandfather as the 4th Earl of Sandwich. He was educated at Eton and at Trinity College, Cambridge, and spent some time going on a Grand Tour around Continental Europe, as any self-respecting young man of means would do at the time. He also visited the more unusual destinations of Greece, Turkey, and Egypt which were then part of the Ottoman Empire.

On his return to England in 1739, the Earl took his seat in the House of Lords and became a sharp critic of the Walpole government. He gained reputation for his oratory in parliament. Half a decade later he would become a commissioner of the Admiralty and had a stint as a colonel in the British Army before coming down with a fever that nearly took his life.

Following a successful spy mission while serving as a diplomat in the peace talks ending the War of the Austrian Succession, the Earl was in February of 1748 made First Lord of the Admiralty — political head of the Royal Navy. He wouldn’t enjoy this prestigious office for long, however, as a powerful political rival managed to have him dismissed in 1751. He then returned to his country estate where history shows he spent a lot of time from then on, despite various later reinstatements and official roles.

The Earl retired in 1782 with quite a number of important posts under his belt. Despite this record, his legendary incompetence and corruption — though perhaps exaggerated by political enemies — nevertheless inspired the saying: “Seldom has any man held so many offices and accomplished so little.”

And well, he is after all best known for his contribution to the foodie world, which would come about because of…

His love of gambling

The Earl’s love of gambling started early and he was betting on horse races already while at college. He would keep this passion, but soon became obsessed with card games like PlayAmo.com/en-CA/games/blackjack, which he could play into the late hours.

In fact, his obsession with gambling and drinking soon became the talk of the town. The legend goes that he became so engrossed in his card games that he could spend a full 24 hours at the table, not willing to leave for any reason. For food he ordered his attendants to just give him a piece of meat between two pieces of bread, possibly a simple homage to the mezze platters he may have witnessed in the Ottoman empire.

The Earl would often eat this simple bread and meat combination in public view at the taverns and gambling houses, and the crowds of course took notice of the habits that supported his marathon stays at the card tables. When they themselves felt like having some fast food, they would order it by saying, “the same as Sandwich!”

French writer Pierre-Jean Grosley recounted as much in his observations of English life (translated to English in A Tour to London) after visiting London in 1765:

A minister of state passed four and twenty hours at a public gaming-table, so absorpt in play, that, during the whole time, he had no subsistence but a piece of beef, between two slices of toasted bread, which he eat without ever quitting the game. This new dish grew highly in vogue, during my residence in London; it was called by the name of the minister who invented it.

It should be noted that one biographer credited the sandwich to his not wishing to take breaks from office work rather than the card table. While the exact details of the invention of the sandwich may never be proven, one thing’s for certain: the sandwich was named after John Montagu, the 4th Earl of Sandwich, who popularized it.

Did you know that our Earl of Sandwich was the main mover and shaker behind Captain James Cook’s famous expeditions? Cook was so thankful for his help that he named after him the Sandwich Islands (Hawaii), Montague Island off the south east coast of Australia, the South Sandwich Islands in the Southern Atlantic Ocean, and Montague Island in the Gulf of Alaska. Cook even named Hinchinbrook Island after the Montagu house.

The Earl was also given a collection of valuable items from the expeditions, and had the second Pacific Islander ever to visit Europe (brought by Cook) to his country estate for a week, presenting him with a suit of armor.

The birth of the modern sandwich

The Earl’s personal sandwich was corned beef between two slices of toasted wheat bread, and was likely the first iteration of the sandwich as we know it today. But cultures around the world had combined meat and bread long before Montagu did. Flatbreads like naan and pita pockets had been paired with meat throughout Asia and Africa for centuries, and the Earl’s traveling in the Ottoman empire would likely have acquainted him with mezze platters, where dips, cheeses, and meats were combined with layers of bread. French laborers also had something similar to the sandwich before, well, the Earl of Sandwich.

A likely reason for The Sandwich in particular becoming the forebear of our favorite fast food (rather than a passing fashion) lies in the Industrial Age’s expansion of the English working class. As workers looked for more inexpensive and portable meals, the Earl’s wonderfully simple concoction happened at exactly the right time and place for widescale popularization to happen.

But it was by no means limited to the lower classes. In 1762, famous author and historian Edward Gibbon wrote in his diary of seeing “Twenty or thirty, perhaps, of the first men in the kingdom, in point of fashion and fortune, supping at little tables covered with a napkin, in the middle of a coffee-room, upon a bit of cold meat, or a sandwich, and drinking a glass of punch.”

The Christmas party that stopped a world war

7 ways to impress a girl after a one-night stand