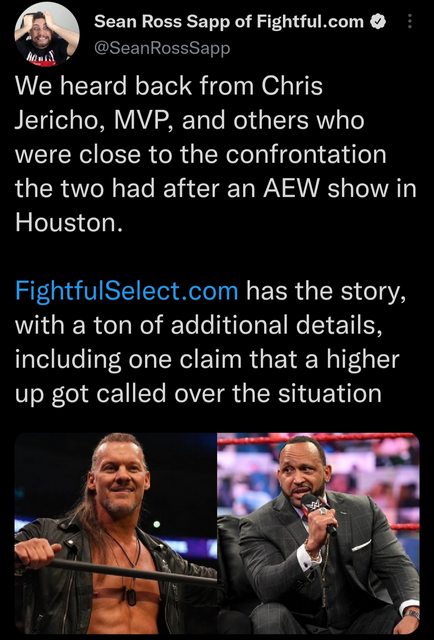 Fightful had heard about the confrontation as far back as AEW Double or Nothing weekend, but facts were few and far between as there wasn't much talent around that saw it. Those close to the situation say that it is true that MVP and Chris Jericho are no longer friends, and it boiled down to social and political issues in which were made public on Twitter. When we asked MVP about the reported confrontation, we were told that "there was an exchange, but it didn't go down like that" and there are two sides to every story, with the truth usually somewhere in the middle. It was established that while the two were former friends, that was no longer the case.

The additional details and claims that we've heard were that MVP was visiting with friends at the talent hotel in Houston after the AEW show. Jericho appeared in the lobby area, and MVP approached him to handle or discuss their issues, depending on which side you believe. At one point MVP was said to have invited Chris Jericho outside to handle their problems. However, Jericho boarded the elevator, and as the doors closed, he said he "doesn't fight jobbers."

When we reached out to Chris Jericho, he stated "Nothing else to say. I don’t fight jobbers. Nuff said."

Another source had indicated that even after the public disagreements on Twitter last year, the two had a private exchange that further distanced the two.

There was a claim from one WWE source that someone in AEW called WWE Head of Talent Relations John Laurinaitis about the issue. We haven't confirmed that, but the source also indicated that he didn't seem to care when he learned the situation ended without incident. AEW sources we spoke to had not heard of that aspect as of yet.

MVP has competed in numerous Brazilian Jiu Jitsu competitions, and Chris Jericho famously front facelocked Goldberg in a backstage fight that resulted in Goldberg telling Jericho his mother was a goof.