It couldn’t have happened at a worse time for Blizzard. NBA had just thrown Houston Rockets general manager Daryl Morey under the bus for pro democracy sentiments, and South Park was reportedly being censored in China for making fun of Chinese censorship in the west. Everyone were suddenly talking about Western corporations stamping the Communist Party of China’s boot on the necks of westerners, and a lot of anger had to be channeled somewhere — anywhere.

And while most of the conversation so far has centered on less than half a dozen entities, even a preliminary investigation reveals that capital’s subservience to Chinese money is a far greater issue than a few spineless suits in a handful of companies. With the help of a researcher whose work was deleted by r/worldnews moderators despite thousands of upvotes, we decided to publish a comprehensive list of China’s Western corporate bootlickers. Decide for yourself if it shocks you.

Anything left out? Please let us know in the comments.

15 embarrassing “before they were famous” commercials

Eilmer of Malmesbury: the flying monk of medieval England

nord vpn is a logging botnet hope you know

So many traitors, so little time. #boycottscumsax

“black pantha” poster in chinaland has it wearing a mask at all times to cover its swarthy face. South park’s episode had it parodied with the mask on. And the swarthy faggot storm trooper from sta wars as well.
You can add that to the mouse’s deeds list. 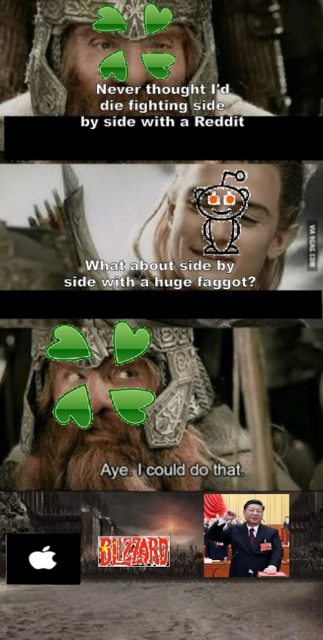 Imagine being a redditor and willingly lowering yourself to not being allowed to say or read anything that goes against the neocon libshit globohomo complex. Worthless consume products and wait for next products soys.

There truly has been too many amounts of unholy alliances within the top 0.01 percent, plus extras and more shilling on the side.

Sir, is this a necessary step? Please reconsider your unenlightened intentions.

Information is always necessary. It will set you free.