In an October 14, 2019 piece titled These Scrubbed Reports Reveal New Secrets Into the Prince Andrew-Jeffrey Epstein Relationship, MintPress News published several PDFs of older Jeffrey Epstein, Prince Andrew, and Ghislaine Maxwell related articles that have since been — in their words — deleted.

This article was originally published on page 10 in the January 22, 2001 edition of Evening Standard and had Nigel Rosser as the byline.

The original Evening Standard article included several images throughout, but we have a text-only pdf. For our cover photo we used an undated photo released by Virginia Giuffre that shows Prince Andrew posing with a young Giuffre, and Ghislaine Maxwell standing in the background. Here’s the pdf’s description of the article’s images:

GHISLAINE MAXWELL: ACCOMPANIED PRINCE ANDREW TO THE WEDDING OF A FORMER GIRLFRIEND, ABOVE PARTY PRINCE: GHISLAINE’S BIRTHDAY AT SANDRINGHAM, AND MODEL HEIDI KLUM’S HALLOWE’EN NIGHT ALL ABOVE ABOARD: PRINCE ANDREW SUNBATHING WITH AN ARRAY OF TOPLESS WOMEN ON A YACHT OFF PHUKET, THAILAND CONSTANT COMPANIONS: GHISLAINE MAXWELL WITH JEFFREY EPSTEIN

IT HAS become almost a weekly occurrence that Prince Andrew is shown by a tabloid newspaper inviting a West Coast “actress”, into his bedroom to tuck him in at 2am, lounging on a yacht surrounded by topless women, or slipping out of nightclubs with various companions.

Previously mostly known for his modest naval career and love of golf, in the past 18 months the Prince has embarked on a new lifestyle redolent of a middle-aged swinger rediscovering his youth in the playgrounds of the Eurotrash.

His erratic behaviour has greatly upset Buckingham Palace and his ex-wife Fergie.

No saint herself in the past, Fergie has been complaining he is so busy clubbing he doesn’t even have time to babysit Princesses Beatrice, 12, and Eugenie, 10.

It is said they shared their concern when the Queen visited Fergie at Wood Farm, Sandringham, over Christmas.

The truth of the matter is that he is spending more time with Ghislaine Maxwell – daughter of crooked financier Robert Maxwell, who disappeared from his yacht before his creditors caught up with him in 1991 – than his own daughters.

In the past year Andrew has been on eight different breaks with Ghislaine in Britain, America, and Thailand.

In addition, Ghislaine travelled to Britain in September to attend the wedding of Andrew’s old flame, Aurelia Cecil. They went together.

So what is Andrew’s fascination with the disgraced tycoon’s daughter, who now lives in exile in New York?

Clearly he revels in the jetset lifestyle she has opened up to him and is determined to break free of the constraints his royal duties have imposed.

Ghislaine has introduced him to her onetime partner Jeffrey Epstein, 48, an immensely powerful New York property developer and financier.

Epstein has joined Andrew and Ghislaine on five of their breaks together in the past 12 months – to Mar A Largo, Phuket, Sandringham, Florida and Windsor – and has also welcomed Andrew to stay at his £30 million New York townhouse at least twice last year.

His influence over Prince Andrew is also causing concern among Andrew’s friends and the Royal family.

Ghislaine is now employed by Epstein as a “consultant” at his elegant Madison Avenue offices.

She stays at his house several nights a week and organises his parties in New York.

She also acts as his interior designer and has sold property on his behalf.

Ghislaine, it is said by friends, remains desperate to marry Epstein. He refuses, but enjoys the social stature that she can bring him.

Epstein’s intensely secretive business life contrasts with his enthusiastic social life. He is rarely seen without a beautiful companion on his arm, or Ghis-laine far away. One friend said: “He enjoys the company of pretty women. Ghislaine is important to him in other ways.

She arranges his social life.”

Ghislaine is also now organising Andrew’s social life in much the same way, introducing him to attractive women and encouraging his relationships with, among others, lingerie model Heidi Klum and PR girl Emma Gibbs. Indeed Ghis-laine, Epstein and Andrew now appear to have evolved a curious symbiotic relationship wherever Ghislaine is seen with Andrew, Epstein is never far behind.

Epstein was a guest at the Queen’s birthday party at Windsor and travelled with Ghislaine to Andrew’s country weekend at Sandringham before Christmas.

He has made many millions out of his business links with the likes of Bill Gates, Donald Trump and Ohio billionaire Leslie Wexner, whose trust he runs.

Prince Andrew’s friends can only speculate what Epstein gains from his association with British royals but clearly it can do no harm to his business reputation in New York.

A friend of the couple said: “She is able to entrance anyone she chooses and Epstein can pay for anything anyone wants. She is very manipulative, and winds people round her little finger.

The whole Andrew thing is probably being done for Epstein.

Epstein will not marry her and it is incredibly likely she’s doing it to keep in with him.”

Friends say the Duchess of York is aghast at the influence Ghislaine exerts over Andrew and the changes that have come over him in the past year, while Princesses Beatrice and Eugenie, who met Ghislaine last year, are apparently confused about seeing their father in embarrassing situations in the newspapers.

Another friend said: “Ghisla-ine is manipulating him and he’s too naive to realise it. She’s his social fixer and he’s going along with it – why?

Because I think Epstein’s fantastically impressed by it all. It’s all very premeditated.

He’s gone from this couch potato to man about town, with nothing better to do than go from one holiday to the next.

“He’s insensitive about how the Palace or his family feel and Ghislaine absolutely indulges him in whatever he wants to do next.

“When the Duchess is working in America he stays up at Buckingham Palace in the week so he can go out to clubs.

He doesn’t even come back to look after the children while their mother is away.

“He’s spiralling out of control.

He’s even started dressing like a 25-year-old in jeans and blazer.

He used to be smart when he came back from abroad, now he hardly even wears a tie. He’s started having a girl massage him and manicure his toes. He even travels abroad with his own massage mattress. Please!”

Andrew leaves the Navy in July and is unsure of his future role, talking vaguely of acting as a roving ambassador for British businesses.

So far this year the orbit into which Ghislaine and Epstein have drawn Andrew has brought little but lurid headlines. In February, while they were at Mar A Largo, Andrew met sex aid entrepreneur Christine Drangsholt, who immediately began promoting her business with pictures of herself and the Prince, implying along the way they had become intimate friends.

Then in May, while on holiday in Florida with Epstein and Ghislaine, he began frequenting nightclub the Crowbar, buying £300 bottles of Cristal champagne for his friends.

In October, back in London, he was pictured sweating profusely outside the West End nightspot China White.

Over Hallowe’en, back in New York with Ghislaine, he made the acquaintance of Heidi Klum and again was observed behaving strangely as he wandered around a “hookers and pimps” nightclub party.

A few days later he was in Los Angeles with an “acquaintance”, self-confessed drug dealer Brett Liv-ingstone Strong, flirting at the bar of the Bel Air hotel with a group of young girls.

One of them, bit-part actress Denise Martell, later sold her story, telling how they kissed and cuddled and she tucked him up in bed one evening when they continued their acquaintance over the next few nights.

Earlier this month, Andrew was pictured sunbathing with an array of topless women on a yacht off the coast of Phuket In Thailand. Further reports claimed he had wandered around the sex bars in the area’s red light district.

This behaviour may well amuse his new friends in New York but they are not the actions of a discreet member of the royal family, friends say.

In fact, one adds, they are the actions of someone who: “Doesn’t give a damn about what anyone else thinks anymore, just what pleases him.

He is not listening to reason.”

One detective, who interviewed her in Manhattan when the police were seeking to trace his assets, can even now recall: “She came in dressed in sackcloth and ashes. It was pathetic. She said she had no money. Yet here was this expensive lawyer arguing with us in a room so air conditioned we couldn’t hear what he said.

“In between claiming she had no money, you couldn’t but help warming to her, she was so solicitous. We hadn’t had any lunch and she was recommending restaurants here and there and where to stay and go shopping, and slipping in from time to time how she never had anything to do with her father’s affairs.”

Detectives were less convinced of her poverty. One SFO investigator said: “It is entirely possible, and we didn’t have the resources to check, that Maxwell could have siphoned off money from some of his 400 companies in America to her. She was living on something.”

Even to this day investigators have little clue how much of her father’s fortune is buried in the offshore trusts he used so freely for the benefit of his family.

Ghislaine is understood to benefit from a trust, set up for her from funds sent from Liechtenstein by Maxwell, paying her some £80,000 a year.

But sources in New York say her lavish lifestyle – which includes Concorde trips, a Florida-registered Jeep and the run of Epstein’s 21,000-sq-ft New York home – is largely funded by the financier.

DRESSED more suitably for a shopping trip on 5th Avenue than an English pheasant drive in his LL Bean hunting boots and $ 1000 leather parka, Jeffrey E Epstein cut a curious figure alongside Ghislaine and Andrew at the Sandringham shooting party.

More at home in the world of international finance than the English countryside, the immensely wealthy financier and property developer maintains a mysterious presence in New York. He has a licence to carry a concealed weapon, once claimed to have worked for the CIA although he now denies it – and owns properties all over America.

Once he arrived at the London home of a British arms dealer bringing a gift – a New York police-issue pump-action riot gun. “God knows how he got it into the country,” a friend said.

He is also a close associate of multi billionaire Leslie Wexner, owner (among other companies) of Victoria’s Secret.

Epstein has the use of Wexner’s $ 40 million New York house and owns seven cars including a V8 Corvette and 1964 Volkswagen. He also owns a $ 3.5 million pink villa in Palm Beach and a $ 3 million, 26,700-sq-ft fortress-like hilltop mansion in New Mexico, fitted with $ 600 bedsheets. One local said: “They think he’s flown in from Mars down here.”

Epstein began working for Wexner in 1985 and by the late Eighties had become wealthy, through, among other things, handling his worldwide airfreight concerns and his fabulous art collection, which includes a $ 45 million Picasso.

One journalist said: “He’s Wexner’s Mr fix-it. He has the spook connections and pulls the strings worldwide. He handles all the logistics and moves the portfolio around for him.” Mr Epstein is linked to several controversial land deals in rural America, where farming land has been quietly acquired by interlinked companies then developed at vast profit.

He is currently listed as owning huge tracts of land in Dutchess County, New York. He declined to be interviewed by the Evening Standard.

>In October, back in London, he was pictured sweating profusely outside the West End nightspot China White.
Might be this photo 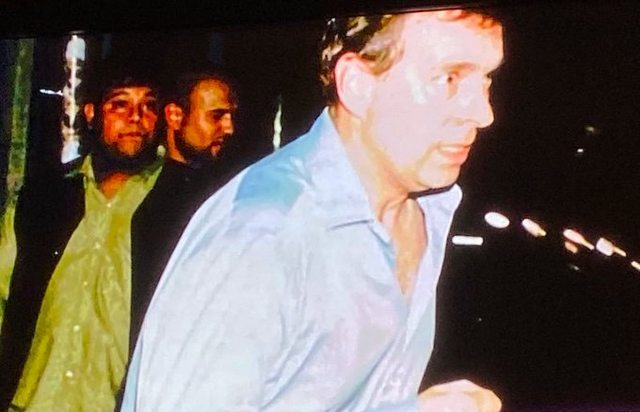 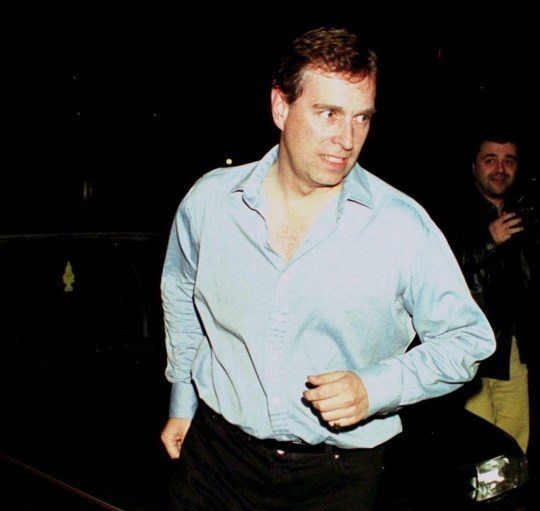 Metro.co.uk:
>Is this Andrew sweating? The prince pictured leaving the Chinawhite nightclub in London in 2000 (Picture: David Abiaw/REX)