“I don’t have much tolerance for caffeine…think it might be my Native American heritage,” said a man who was hitting on me recently. He was, well, white.

“Yeah! I’m technically Cherokee.” He spoke with confidence. And who knows, he might have really had Cherokee heritage. I’d just heard the joke far too many times to believe him.

Cher, Johnny Depp, Bill Clinton, Miley Cyrus, Johnny Cash, and Elizabeth Warren are all members of the not-so-elite tribe my would-be suitor belonged to — people who declare having Cherokee blood, but have no real way to back it up. Call it the tribe of the Wannabes, the Cherokee Syndrome, or a blood myth, but the number of Americans claiming to be one-sixteenth Cherokee or who “think” they “probably” had a great grandmother who was a Cherokee princess is a vastly growing group. Perhaps more rapidly growing than any Native American tribes on Earth, and that’s because there are no documents to prove the validity or invalidity of any of their claims.

Could those five self-assured kids in your high school who claimed they were Cherokee actually be correct? Let’s do the math. According to the 2010 U.S. Census, the Oklahoma-based Cherokee Nation had more than 314,000 members, the largest of the 566 federally recognized Native American tribes. It follows that the three federally recognized Cherokee tribes — the Cherokee Nation, the United Keetoowah Band of Cherokee Indians, and The Eastern Band of Cherokee Indians — are comprised of the 819,000-plus people claiming Cherokee ancestry on the U.S. census. That’s only about .2% of the total population.

While most Cherokee members actually know their lineage due to mandated tribal roles that date back to the 1800s, many so-called Cherokees have been putting their feather in the headdress of a completely fabricated ancestry. A word of mouth legend that’s been handed down for generations from one well meaning but mistaken grandmother to another sporting the same ‘black coal hair.’ Claiming American Indian blood is listed as a prime activity on the Stuff White People Do blog. The market for Cherokee-oriented DNA tests has been booming in the last decade. What gives? — and, as I asked journalist Mary Annette Pember, who has written widely on the topic, why have the wannabes clutched onto the Cherokee tribe so specifically?

“Why Cherokee? Good question. I think there must be a Hollywood component that made them the ubiquitous Native tribe. Maybe people like the description of Cherokee as ‘civilized’ therefore not too risky to claim the heritage,” Pember tells me, a member of the Ojibwe — though she’s been asked if she’s Cherokee more than a handful of times.

That iconic ‘Hollywood Indian’ Pember is referring to might very well have originated with Iron Eyes Cody aka “The Crying Indian.” Storming into cultural consciousness in 1971, Iron Eyes Cody was the star of one of the most powerful anti-litter PSAs put out by the Ad Council. In the TV spot, the image of the Noble Savage canoes through some polluted water and arrives at a highway where fast food is strewn about at his feet. “Some people have a deep, abiding respect for the natural beauty that was once this country. And some people don’t,” a baritone voice-over booms as a single, full tear rolls down the Crying Indian’s cheek. The role may have been a home run with the environmentalist set, but after a career of playing over 100 Natives, it was revealed that ole Iron Eyes was actually Espera Oscar de Corti, a Louisiana-born actor with 100 percent Sicilian ancestry. It turns out Iron Eyes Cody, in fact, was kind of afraid of canoeing.

Maybe Iron Eyes Cody and Miley and, yes, ridiculously Tonto-ed up Johnny Deep are just symptoms of a culture that prides itself on novelty, optional ethnicities, and wild misappropriation. (You have seen the Urban Outfitters inventory, right?) Maybe Cherokee heritage is claimed to boost job prospects or get into a better college. Maybe it’s viewed as a “preferable” option to other ethnic minority identities in America. Or maybe the Cherokee myth arose from the strong seduction of being a member of something large, romantic, natural, and far, far away from an ugly colonialist past.

Twila Barnes, citizen of the Cherokee Nation, genealogist, and writer of the blog, “Thoughts from Polly’s Granddaughter” thinks the Cherokee blood myth might have derived from something much graver. “In the early 1900s, Cherokees were entitled to a share of the money due the nation for its land in the southeastern US (the land taken during the forced removal, or Trail of Tears.) There was no penalty for people applying for a share, even if they weren’t Cherokee. The worst that could happen is they would get rejected. Lawyers traveled the country telling people that for a small fee, they could help them get a share of the money,” Barnes tells me. “Luckily for the Cherokees, they had a lot of records, so nearly all the fraudulent applications were rejected. There were approximately 90,000 applicants for a share of the money and nearly 2/3 were rejected. Most because they were not Cherokee.”

How did the idea of the Cherokee get so big, and ostensibly, the largest claimed ethnic identity in the history of the country? “I think it is because they want to descend from the oppressed rather than the oppressor and since the Cherokee Nation has a lot of light skinned Cherokees, it is easier to claim us than to claim a tribe that requires a higher blood quantum for enrollment,” Barnes explains. “The Cherokees were viewed as a ‘civilized’ tribe.”

As Jack Hitt described in the 2005 New York Times‘ piece “The Newest Indian,” the idea of blood quantum that Barnes is referring to comes from the old genocidal system for measuring racial purity. Today, it’s become a standard for something else entirely, sorting out the ethnic shoppers and pseudo-mystic healers from the real tribespeople or those descended from the Dawes rolls.

“It’s worse when people say their ancestor refused to “take anything free from the government” or when they say their ancestors refused to enroll for Dawes. That shows they know nothing about our history and it actually is insulting to my ancestors when they say it. The allotments were not a gift from the US government.[…] Some Cherokees laugh and giggle about fakes. Others get angry. Some don’t care. From my own personal knowledge, most Cherokees are at least somewhat offended.”

Will Chavez, Cherokee Nation citizen, has been wondering the same thing as me. Sometimes he feels like Cherokees are the butt of all Native jokes.

“The Cherokee were the most populous tribe in the southeastern United States before forced removal in the early 1800s with a population of about 16,000. In the years following removal, people began to pop up in the states we once lived in —Alabama, Georgia, Tennessee, North Carolina— saying their Cherokee ancestors hid out and didn’t go on the Trail of Tears. There may have been some truth to some of those stories, but from the records I’ve studied, not many escaped,” Chavez explains to Nerve in regards to the unlikelihood of so many supposed Cherokee.

Does he buy any of it? “I don’t believe most of those stories. And some of these so-called Cherokee descendants in the southeast have formed their own “tribes” or “bands” and perform ridiculous pan-Indian ceremonies that resemble nothing belonging to the Cherokee,” Chavez says. “The worst part is the silly names they give themselves like White Owl, Dancing Hawk, or Chief White Wolf.”

Chavez cites the prolific number of Cherokee, the number of family folktales, and the growing spotlight that have made the Cherokee ancestry so heavily claimed. A few years ago, the Cherokee Nation even had to go so far as to form a task force to deal with false claims of being Cherokee descendants. “Depending on my mood, it usually takes all of my patience and self-control not to tell someone to knock it off when they start in about their Cherokee grandmother being a lost Cherokee or they know they are part Cherokee because they have high cheekbones,” Chavez confesses.

I asked Pember if she ever reaches the tipping point with the “Cherokee Syndrome.” She says, “[I’m] not as disgusted as I used to feel. Guess I’m softening in my old age. No longer feel the need to educate them, I just smile and say, “oh, how nice.’ I know now that what I say won’t matter much, they have a nice family myth and they will continue to cling to it, preposterous or not.”

But the claim to Cherokee blood by many unverified (and, yes, white) Americans is as preposterous as it gets. Cherokee has become a synecdoche for all Natives — an easy passage to some innate and ordained cool from the past. “I think people are desperately looking for a sense of place and connection. As human beings, we need to have a connection to the earth, to place and ultimately to each other. Unfortunately, the only way some folks know how to find or get something is to buy it and own it as quickly as possible,” Pember writes.

Just look at Cher in her video for her 1973 hit “Half Breed.” Atop her dark horse, rocking a super-sized white headdress and dangling her bare feet, she croons the injustices of being half Cherokee-half “white.” Of course, Cher is not short for Cherokee and much of her purported Native ancestry remains unverified — sucked up into the weird American vacuum that is the Cherokee blood phenomenon.

Kate is a freelance writer and regular contributor to Mic. A former editor of Nerve, her writing has also appeared in the New York Times, Playboy, Refinery29, Salon, and The Daily Dot. On most days she is thinking of Louis C.K. 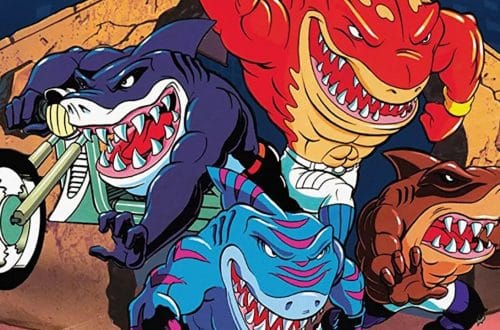 95% of white americans have no indian or black ancestry and those that do, have little. 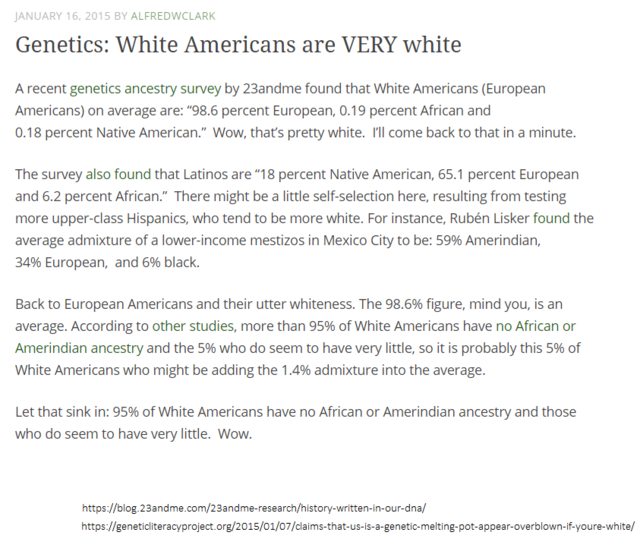 I’ve been on the “you do NOT have native ancestry” kick for decades, knowing it was just a myth spread around. The reason I was told by older folks in the South was that it was planted in family lore in order for people to see natives more favorable since they shared ancestry.
That said, my grandson’s paternal grandfather who was adopted as a small baby recently did the DNA thing & he’s 100% native, which it turns out, he already assumed from what his parents had told him.
I thought the man was Greek, lol. We gave my grandson a test & yes, he came back 1/4th native.
I guess I was wrong & some ppl do have more native ancestry than I realized, or this was just an abberation. At this point, I have no idea where I stand on the matter.

Hey now y’alls be leaving someone out? 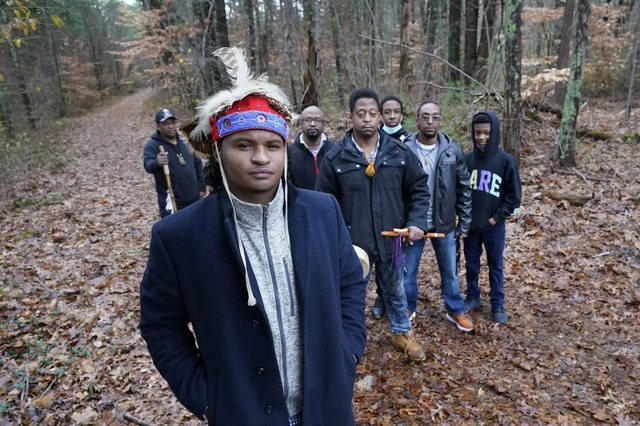 My great great grandfather on my father’s side was full-blooded Cherokee princess named Chief White Eagle and fought in the CSA in a mounted guerrilla unit defending the WNC mountains from Yankee troops. Granted, there isn’t much Cherokee in my genes (overwhelmingly being SaxoGemanic), but what blood there is is documented and 100% badassed. Not all Americans are Fauxocahontas, just the shitty ones.