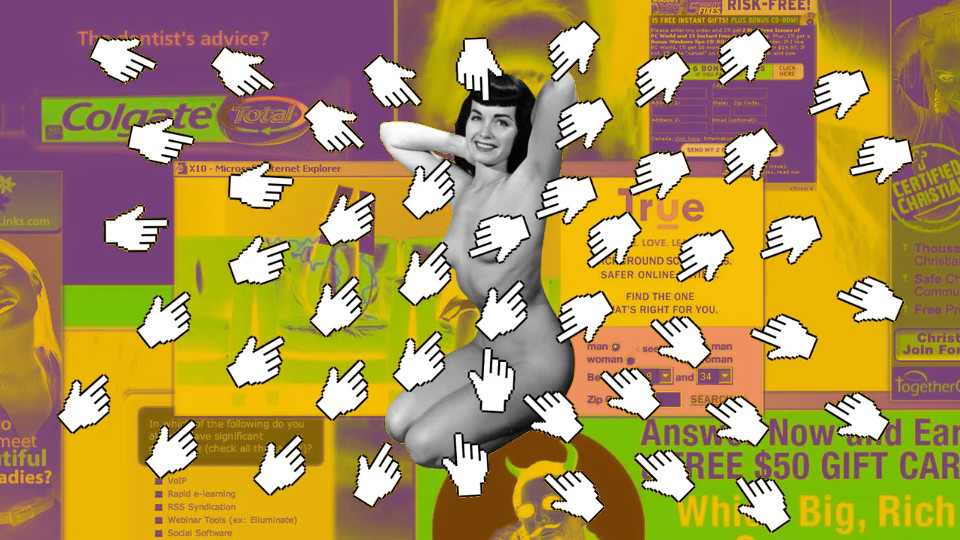 Assuming the dictionary’s correct and an amateur is:

A person who engages in a pursuit, esp. a sport, on an unpaid basis. A person considered contemptibly inept at a particular activity.

The first adult websites, excluding Playboy which started in 1994 when most people thought the web was a band, grew out of the exhibitionist and swingers scene that dominated sex-themed Usenet newsgroups, the email-based forerunner of the World Wide Web.

When the web made downloading images from the internet simple, pioneering newsgroup exhibitionists started websites, and the majority of people, who to this day think the web and the internet are the same thing, discovered the joys of looking at OPP (“Other People’s Partners”).

Traffic to the most popular free sites exploded. Danni Ashe launched Danni’s Hard Drive in 1995 after reading The HTML Manual of Style and Nicholas Negroponte’s Being Digital during a vacation. When news of her natural cup size 32FF boobs got out, her site got shut down by her ISP and had to be moved to a web server all of its own — the site eclipsed the bandwidth use of the whole of South America in those early days. The push of costs and pull of popularity quickly lead to people charging for subscriptions and making money, and Danni’s Hard Drive went on to make a profit of $6.5 million for the year 2000.

Even when people started to take on employees and buy offices, the “amateur” tag stuck. People couldn’t believe they could make such an easy living, and the business itself was amateurish. To buy a subscription you’d email in credit card information, which was typed into a spreadsheet, run through a machine like a restaurant transaction, and confirmed with another email a couple of days later. Digital cameras were primitive, web design meant picking colors, and everyone was learning.

The pioneers were often women and mostly people with no previous technology background. The closest thing to big-business were premium-rate phone operators, who grasped the net faster than anyone, Playboy — who like most magazine publishers fundamentally misunderstood the value of the web, and sleazy guys like Seth Warshavsky taking advantage of a medium few understood.

Seth Warshavsky founded of Internet Entertainment Group (IEG). During the dot-com bubble, he was the face of the online pornography industry, the only segment of the dot-com industry operating at a profit.

On IEG’s flagship subscription website, Clublove.com, you could watch post card sized, low resolution images of women strip and touch themselves in real time. For extra money, you could talk to the camgirls over the phone and direct them.

He was featured on the front page of the Wall Street Journal in 1997. Warshavsky was also rated by Time Magazine in their Digital 50 edition as one of the 50 original pioneers of the internet, with the likes of Bill Gates, Jeff Bezos, and Steve Case (Warshavsky was #40 out of 50). Warshavsky was involved in many of the early Internet’s porn-related media controversies, including:

At IEG’s peak, Warshavsky claimed to have 100,000 subscribers and $100 million annual revenue, although subsequent events cast doubt on the veracity of this earnings claim. Pamela Anderson and Tommy Lee filed a $90 million copyright-infringement suit against IEG in 1998 to claim a share of the profits of the video of them. A U.S. district court judge dismissed the case, ruling that the duo gave up their rights when they agreed to let IEG webcast the footage. Following appeals, Anderson and Lee were awarded a $1.5 million judgment plus court costs and attorney fees in December 2002.

As the gold rush brought thousands of people, eager to cash in on the my-wife’s-hot-check-out-her-vagina business model, online free sex content went from being an expression of exhibitionist lust to a marketing tool.

Even if the traditional amateur approach to content production — pointing a handycam at a genital pile-up and encoding the results — mandated a certain ineptness; truly amateur, catch-free sex content, was almost entirely consigned to history by late 1998. There was no need, and little desire, to give stuff away with so much money being made, leaving a fast growing mass of free material designed to lead people down a path to making a purchase.

While Playboy produced a Women of the Internet issue and hoped that’d be the end of it, the studios tried to co-opt the web without getting too seriously involved in a revolution they wished wasn’t happening. Blind to the future, they offered the most popular, best-looking amateur stars contracts — not understanding it was pointless to get paid $5,000 a month to have sex with a strangers in California when they were making $100,000 a month having sex with their friends at home.

The websites they built had protecting DVD sales in mind above all else and were hobbled by aggressive advertising, limited content, and corporate insincerity. Lacking serious competition, amateur sites thrived and “professional” online sites, seldom more professional in actuality than the amateurs, catered instead to buyers who wanted to see the kind of material they enjoyed in magazines and movies.

The only reason to cede control of your career was for the PR a big company could provide, and they only offered that to the most glamourous performers. Jenna Jameson herself saw the control a website provided faster than most and made ClubJenna the center of her career. (It would have been JennaJameson.com, but she wasn’t thinking of the web when she chose her name. She had to buy it back later when she could afford to correct her mistake.)

9 effective tips on how to look taller in photos